Recently, Keriton’s own clinical expert and lactation consultant – Kelly Convery – had the lucky chance to chat with Naomi Bar-Yam, the president of the Human Milk Banking Association of North America (HMBANA) and founder of Mothers’ Milk Bank Northeast (MMBNE).

MMBNE serves neonatal intensive care units throughout the northeastern United States by providing screened and pasteurized donor human milk. In the event a NICU mother is unable to provide all or any of her own breast milk, donor human milk is recommended by the American Academy of Pediatrics (AAP) as the next best feeding choice for the country’s sickest and most fragile hospitalized babies.

What is the history of the Human Milk Banking Association of North America (HMBANA)?

HMBANA was established in 1985 after the growing milk bank movement took a very sudden, big hit with the emergence and understanding of HIV. It was established by the few remaining milk banks and its initial mission was to create a set of evidence-based guidelines to ensure the milk we were dispensing was safe. It took about 5 years of conversation with the FDA & CDC to create those guidelines – but by 1990, we had 6 banks operating – which has now grown to 26 total – with several more in development.

How did you get involved with HMBANA and Mothers’ Milk Bank North East?

The youngest two of my four children were born into NICUs. I had more milk than I needed with both. I had not heard of a milk bank milk bank was when they were born. I later learned – being in the maternal/child health world – about milk banks and realized we didn’t have one in the Boston area. So I did a little bit of homework and discussed it with the family and sent around an email to some colleagues and said, “So – there’s no milk bank here. Does anyone want to do anything about that?”

We had a meeting in my living room in March 2006 and the rest is history. It took us about 5.5 years to get fully up and running – we were fully operational in August, 2011.

Milk has been shared for millennia! It’s not new. We didn’t make it up! There has also been a recognition for a very long time – like going back to ancient Mesopotamia, Egypt, and China – that milk sharing is something that should be regulated.

Unlike informal sharing, HMBANA milk banks have oversight, certifications, protective measures, and safety regulations – including pasteurization and culturing milk for bacteria. HMBANA protocols and procedures are designed for the fragile, premature babies.

What I really want parents to know when they’re researching milk sharing is that this risk is something to be aware of. Informed consent doesn’t work if it’s not informed. They need to know that with informal sharing, there is a 5% or higher chance that a potential donor may have a disease that we know crosses through milk. So those are things to think about and weigh in to your decision.

What is the screening process like for your potential donors?

Our screening process has multiple parts, and is modeled after blood bank screening. A mom will either email us or call us and tell us they want to be a donor.

1. The first step is a phone screen, similar to blood bank screening. For our purposes, we add additional questions about medications that blood donation doesn’t have to worry about. This phone screen serves two purposes; it tell us if there are any big red flags that will not allow us to take mom’s milk and it allows us and the donor to get to know one another. We have an ongoing relationship with our donors during the time they are donating.

2. Once she gets through the screening, we send her a packet of material that includes a 6 page health history form, consents for us to contact both her doctor and her baby’s doctor (so they can sign off that both are healthy enough to donate). Once we receive those back we send the mom a blood kit and she goes and has her blood tested for HIV, HTLV, Hep B, Hep C, & Syphilis. If all that blood comes back negative, then a mom can donate.

Do you feel the use of donor human milk in NICUs is increasing?

Yes. There’s an increase in NICUs. As of today, we are serving 80+ hospitals, with a mix of Level I, II, and III NICUs. Full-term and late-preterm nurseries that are now beginning to use donor milk as a result of the research on the value of human milk. The research proves that human milk matters. That research is just too compelling. Human milk is life-saving for these very small babies!

The expansion of donor milk out of NICUs to newborn nurseries is also partially due to the Joint Commission’s accreditation guidelines that grade the number of babies that are on an exclusive human milk diet.

What do you see as challenges to getting donor milk in more NICUs?

It has been interesting for me over the last 10-11 years of doing this – to see the way the conversation and concerns have shifted over time. I think cost is still somewhat of an issue less-so than it used to be.

The biggest concern we hear right now is that very small babies don’t grow as well on donor milk as they do on formula and that milk needs to be fortified. But when you’re talking about a baby born at 25 weeks, how are they supposed to grow when they come early? If they weren’t born premature, they would still be getting everything through the cord. How do you feed and grow babies who should be getting everything through the cord?

What we do know is that human milk matters and works better for these small babies. One of the biggest things we worry about for fragile babies is NEC – necrotizing enterocolitis – which is a very serious gut infection that has a significant morbidity and mortality rate. It almost exclusively affects premature babies. Formula-fed babies are considerably more likely to get NEC because they don’t have the protective factors of human milk.

Do you think the availability of donor milk will discourage moms from breastfeeding their own babies?

Our objective is to always have a mother feeding her own baby. We don’t advocate to replace mother’s milk or for an exclusive donor milk diet. We feel donor milk should be available as an element of breastfeeding support.

If I could shutter my doors tomorrow because nobody needed me anymore, I would consider that a very successful outcome! But, it’s just not going to happen.

What is your current process in the event of a recall?

We track our milk very carefully. We know every single one of our donors and we keep detailed records. When we pasteurize milk, we pool the milk of more than one mom in a batch and we keep track of exactly which mom’s milk went into which batch.

If there’s a recall or a problem with the milk, we are mandated through our HMBANA guidelines to find out who’s milk went into that batch and where all of the milk from that batch went so we can notify the recipients. This must all happen within two hours.

Do you currently have a system to track donor milk once it leaves the milk bank and gets to the hospital?

We do not – which would be lovely to have! Because once it gets to the hospital – from a data collection perspective – the milk falls into a black hole for us. We have no idea who gets the milk, what their situation is. We do not want personal information about the babies – but data like gestational age, birth weight, how donor milk babies are doing – those sorts of things would be really helpful for us to have and there’s no way to get that information. We can’t ask hospitals to send it to us because nurses are already stretched very thin. I’d rather have them taking care of babies than sending us data.

Would a system that allowed you to collect anonymous data about the demographics of the babies that receive your milk in the hospital be helpful?

I think those kind of data are good for science. That data should be out there. This is research we need. Do babies grow more slowly on donor milk? What does that tell us? There’s so many research questions that a large database of anonymized data would help us to answer – it would keep graduate students busy for a long time.

Is there anything else you would like people to know about MMBNE and HMBANA?

I think it’s important that women know that, with a prescription, we are also able to dispense milk to outpatient babies in need, not just hospitals.. Oftentimes, it becomes what we call “bridge” milk. Moms start giving donor milk in the hospital but her supply is still not up when she goes home. In those cases, we can send out a few bottles of “bridge” milk until her own milk supply comes in. And that’s part of the breastfeeding support piece of what we do.

Also, we will never pressure moms to donate but I want more moms to know that donating is an option. I want donating milk to be like donating blood. Not everyone can or wants to give blood, but at least everybody knows about it. We still get phone calls – not as often as we used to, but still – they say, gosh, I wish I’d known about donation because I had a freezer full of milk with my last baby. 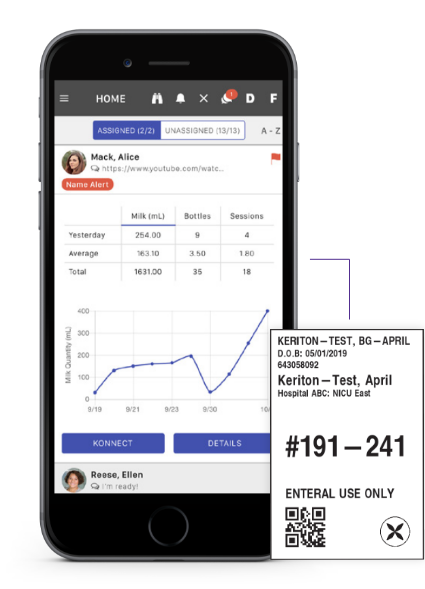 For Lactation Consultants to Intervene on Time

“This is the best NICU invention ever.” 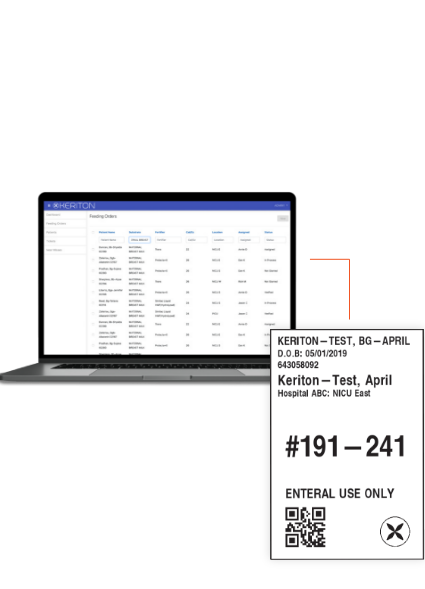 For Feed Preparation, Safety is Key

Feed order review, prep, and recipe calculations are manual and inefficient in Milk or Formula Rooms. With Kare Tech:

“It is great how seamlessly it tracks expirations for me to effectively use mom’s inventory!” 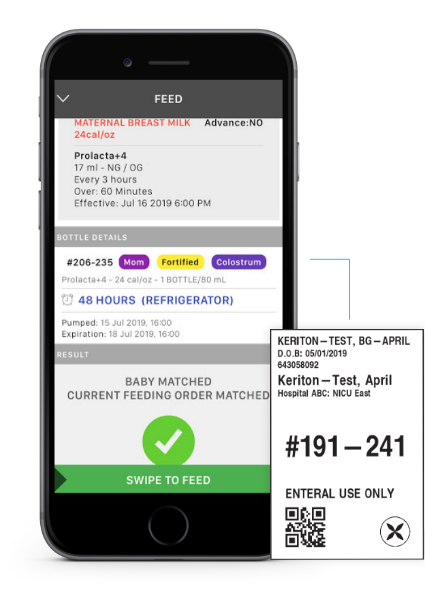 For Nurses, Accuracy and Efficiency are Key

“I am easily saving half of the time from my previous system.” 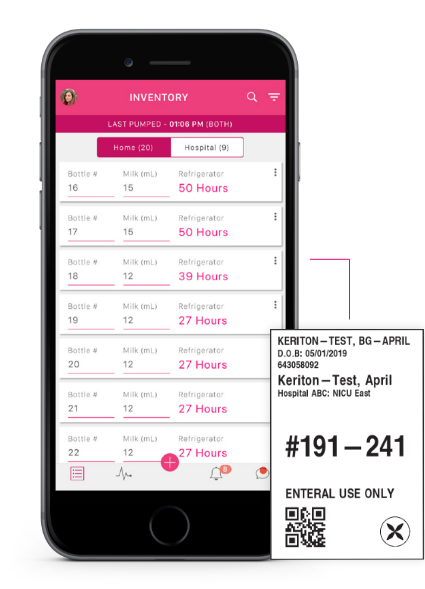 It All Starts with the Mom

Labeling each bottle by hand is error prone. With Kare Mom, moms are able to:

“Some of our moms would have not continued pumping had it not been for Kare Mom.”